History of the Swell Fork 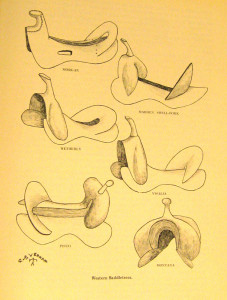 Around the turn of the 19th Century, as cattle ranches began  spreading north from Mexico & Texas, so followed the Vaquero. These cow hands were often met with unruly livestock, both those to be rode, and those to be roped. A string of horses were meant to be ridden in turn, and even the best cowboys were challenged by these snaky broncs. Equipped only with the slick fork rig he rode in on, many cowboys often tied a coat or a rolled up blanket across the saddle fork for added security, while convincing his mount it was time to go to work. But this proved to be less then adequate on many an occasion. Even detachable bucking rolls, brought out by John Clark Saddlery Co., of Portland Oregon, fell short of the task. It was during this time, though exactly when and whom, is not completely clear, that the concept of built in swells was conceived. The earlier discovery of the soft wood, rawhide covered tree, contributed greatly, if not completely, to the new integral part of the saddle, and soon caught everyone’s fancy.

There were many sporadic attempts during this trial and error period, and not many survived the test of time. However, in 1894,  a production foreman, for the George Lawrence CO., brought out a high, 12 inch wide, straight fork, that he rounded out to bring the swell down next to the tree bar. This was later developed into the famous Portland Tree. During the early 1900’s many tried to lay claim to the original swell fork design. The Al Frustnow Saddlery Co. of Mile City Montana, stated in their 1916 catalog that they originated the swell fork design. And again, Victor Marden of The Dalles Oregon, stated positively that he brought out the first modern swell fork saddle in 1904. Pictured in his catalogue, and advertised as the Marden Swell Fork Tree. These trees were manufactured by the Ringhoffer Bros. of Walla Walla, WA., under Mardens direction. Regardless of who was the first , the concept caught on like wild fire through out the saddle making world. E.G. Noble, of Heppner Oregon started producing swell forks around 1906. The Hamely Co. of Pendleton OR, in 1907, and George Lawrence of Portland, OR, around 1908.

As with any new concept, each maker had their own ideas of the proper shape & form. Swells were set high, low, rounded etc. With variation in thickness, width, and taper. Each to suit individual demands. Examples ran between a modest 10 to 12 inches wide, to an extravagant 24 inches in width.

Though some of the old slick-fork rigs continued in service in the Great Plains, the swell-fork had crossed the Continental Divide and spread through most of the cow country by around 1912. Whether built on the Ellensburg, Nelson, Montana, White River, Taylor, Meanea, or Portland, they took their place as the standard cowboy stock saddle throughout the west as all around outfits for cold back broncs, dragging calves to the branding fire, and for long days on the range.

Any cookies that may not be particularly necessary for the website to function and is used specifically to collect user personal data via analytics, ads, other embedded contents are termed as non-necessary cookies. It is mandatory to procure user consent prior to running these cookies on your website.